As beautiful as this is, it isn't even, like,  a hiking destination; this is just a rest area in West Paris, Maine.
Posted by Lori Watts at 5:00 PM No comments: 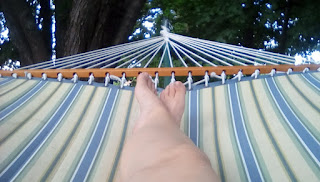 Posted by Lori Watts at 5:47 PM No comments:

Yesterday was a bad day. One of the pottery studios I teach at - both of which are shut down due to the pandemic, obviously - has closed its doors. This is the first concrete thing to happen within my immediate circle that makes it clear that things are not going back to the way they were before. I suppose I have been cherishing a forlorn hope that we will all hunker down - maybe until summer? - and eventually the virus will be over, and then we can go back to our lives, almost like we just hit pause.

Every now & then it hits me that we will never return to the before-times. Everything is different now, and nobody knows what will be on the other side of this. Four months of turbo-boosted unemployment sounds great until you remember there's a very good chance there still won't be work at the end of it.

I have time to do some home improvements now, but I am not - I am putting every spare penny into savings, because I don't know when I will be able to earn income again.

The title of the post is "Good Days and Bad" but I am not having very many good days right now. I guess the good days are the hoped-for ones, whatever they might look like, when all this is over.
Posted by Lori Watts at 7:12 AM No comments:

Days of Covid - This is my job now

I stopped writing for a stretch, because it was all the same. Nothing has changed now, except maybe my mind.

This is my job now. I get up, I do a "workout" - in quotes because all it is is pedaling the Fitdesk while I read my emails & the news. I search for good news about the pandemic but it seems it is always bad: that malaria drug isn't panning out. Covid-19 can reappear in people who have recovered. Nowhere near enough tests available and some of those that are, are bogus.

Now I am bummed out, so if the weather isn't awful I take a walk. This is safe in my neighborhood - I almost never see anyone else; if I do it's easy to keep a good 20 feet away.

When I get home, I work on some little home-improvement project. I am trying to do only those things  for which I already have the materials, to avoid a trip out into the world - I take lockdown pretty seriously! So, I paint baseboards, I hung a towel loop, I spackle some damaged drywall.

I also clean a lot.

After lunch I work on Duolingo - I have been trying to learn Spanish for years, and I am finally making some progress! - or I read a book. I call my mother every day, and sometimes other friends, but all in all I am astonished how easily I have adapted to not seeing with anyone but Doug. I've always been an introvert, so maybe I shouldn't be surprised...I'm actually a little worried that, like bras and what I now call "hard pants," it will be difficult to return to wearing my public face every day.
Posted by Lori Watts at 5:25 AM No comments:

Some notes on how things are different now. I just want to get these down, so I remember, when - if- things go back to normal. In addition to all non-essential businesses being shuttered, and all schools closed for the rest of the school year:

I don't know how long we will be in the corona times. Governor Mill obviously thinks it will be at least until the end of this month, because her executive order extends that long. I don't know if things will ever go back to the way they were in the before times. I still remember the last conversation I had with students, at the end of the last class I taught - I had no idea it would be the last, no idea.
Posted by Lori Watts at 5:53 PM No comments:

I went to somewhere other than the grocery store, for the first time in three weeks. I went to Lowes and bought supplies to do some small repairs around the house. Yesterday I began patching some cat-damaged walls; I'll finish those today. I already replaced a missing strike plate on a bedroom door. I have two broken light switches that I hope to get to today - with any luck I won't get electrocuted.

So, it took about three weeks for me to get past the weird zombie feeling of this confinement; three weeks to get my mind around the idea that normal life is not going to resume any time soon, and start planning what I want to use this time for.

I spend part of the day yesterday trying to help my mom figure out what she needs to do to receive the economic impact check included in the CARES act. At this time yesterday, the IRS was saying that people on Social Security or disability had to file a tax return - but they couldn't mail out a tax return, or accept a tax return with zero dollars of income electronically. This seemed crazy to me, not least because I only found out about it by accident - how are seniors supposed to navigate this, when they are not supposed to be leaving their homes? I verified that it was true with a friend who is a tax preparer, then set out finding someone who had a printer who could mail my mom a form.

All that turned out to be unnecessary, as, in response to a letter from 41 Democratic senators, treasury secretary Mnuchin changed that rule. (I have to wonder - why would anyone have put a rule like that in the first place? ) As of last night, Social Security recipients will automatically receive the CARES act money.

Posted by Lori Watts at 7:49 AM No comments:

Two things to report today: I got my OK from the state for unemployment. It's not much! It wouldn't be enough no matter how frugal I was if not for the CARES act boost it will get. I mean, I get why: in normal times you don't want people feeling as comfortable not working as they are working, because there are, presumable, jobs they could get if they try - but it's very easy to not get a job if you don't really want one.
Anyway it doesn't matter, because this isn't normal times.

I also re-started DuoLingo. About five years ago I got my first & only smartphone. I got it so I could take use a credit card reader at art fairs, but as we all know, they can do a great deal more than that. One of the apps I got was DuoLingo. I've been pecking away at learning Spanish for years, not, honestly, making much progress - I know a lot of words, I can repeat back phrases, but I could never have a conversation. DuoLingo was great but my cellphone isn't! Being an artist, I do not have a bunch of money lying around for stuff like that, so I got a $70 Android, which serves its intended purpose well, but only has room for a couple of apps. DuoLingo was not one that I absolutely needed, so I deleted it and forgot about it. I have re-discovered it, for laptop. I should have known they would have a website! Will it stick this time? It's hard to say.

In virus news:
More than 30,000 people are expected to die from coronavirus in the US next month alone.

Before this is over we all will have lost someone we care about. I fear for my mother, her cousin, and my godmother, all ladies in their 80s, all with underlying health conditions. They are self-isolating but nobody can isolate perfectly. I fear for my husband, as men are harder hit than women, and he's never been an attention-to-detail guy, so things like "Wash your hands frequently" and "Don't touch your face unless you just washed your hands" don't make much of an impression on him. He tries! I think he's got some ADHD going on. I don't really fear for me, or maybe I just don't think about it as much.
Posted by Lori Watts at 4:21 PM No comments: