The View Across the Scarborough Marsh 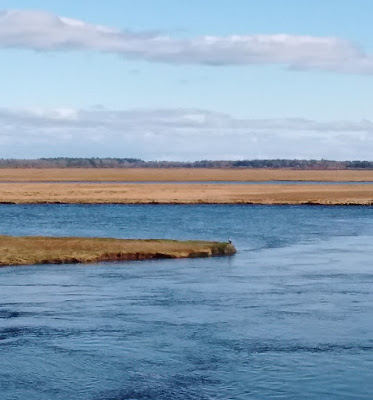 I grew up in Scarborough. The marsh with all its attendant wildlife was ordinary to me; cormorants and heron and egrets were just birds. I didn't know what an amazing place it was until I moved away.

My first awareness of environmental issues came because of it. I was six, and my family had just moved to Scarborough from Brewer, an inland city in Central Maine. One we drove by an abandoned building - more of a shack, really - bordering the wetland. Someone had painted this graffiti: Save the Marsh! - The Gull.

My mother explained that there were people who wanted to fill in the marsh, to build houses and businesses. I pondered on that: houses and business were good, right? But where would the thing that lived there go? Some other marsh? What if that one got filled in also?

This was before environmental laws protected areas like the Scarborough Marsh, but blessedly the marsh survives. I visit it frequently; my father's ashes are scattered here, and I go to smell the salt air, watch the birds and think of him.
Posted by Lori Watts at 9:17 AM No comments: