Be Yourself...Unless You Get A Chance To Be Batman 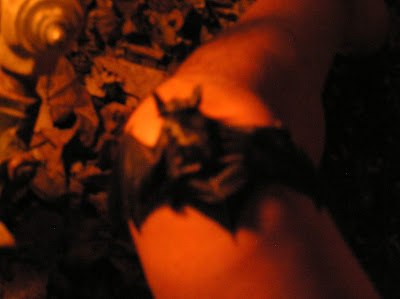 My husband got a chance to be Batman, and he took it.

Not, you know, the Dark Knight...that guy's got a screw loose anyway. Don't be that Batman. But if you get a chance to be a hero to a bat, do it.

A few nights ago, I got up in the wee hours to check on my kiln (I'm a potter.) My husband Doug was kneeling beside the low flame of the burners, with what looked like a wet black washcloth cupped in his hands. As I watched, the washcloth extended one leathery wing.

It was a wet little bat! Well, technically, it was a wet big bat - Maine has Little Brown Bats & Big Brown Bats, and this one was the "big" variety, although clearly that's a relative term as it was only about 4" long. It had gotten in the house somehow, and then had the misfortune to land in the soapy water in the sink. At some point in the night Doug got up & discovered it struggling, and scooped it out of the water. He held it near the burner flame until it had dried off enough to fly.

I'm greatly relieved that it did, because I could see him gearing himself up to ask if we could bring it inside & nurse it back to health. I'm a big bat fan, as it happens, and I think we should encourage their population...in the wild. Bats charm me less in the house! But that proved unnecessary, as this little (big!) guy eventually made his way to the eves of out garage, and was gone by morning. Hopefully it's now busy eating mosquitos!
Posted by Lori Watts at 10:18 AM 2 comments: