This is maybe my favorite Sonny Probe song of all time:

And that's saying something. I'm so fond of Sonny Probe I married him.
Posted by Lori Watts at 8:06 AM No comments:

Who says beaches are only for summer? Not Hugh Sharp.
Posted by Lori Watts at 8:19 AM 1 comment:

Belfast, Maine after the Storm

Photo by Ben Holbrook of The Republican Journal.
Posted by Lori Watts at 8:53 AM No comments: 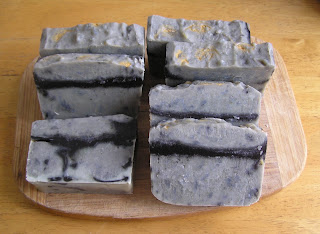 Something about winter weather puts me in a mood to make soap. I work in small batches - limited editions, you might say - of 7 to14 bars. Sometimes I repeat a design, but, as with pottery, no two are ever quite alike.

This batch is called Green Granite and Onyx, but I debated calling ti Sharp-dressed Man, because it has a light, slightly musky but definitely masculine scent.

Will be available around March 10. Depending on the method, soap needs some time to cure, and for the lye reaction to fully finish. Will post the link here when these are ready!

Meanwhile, it's still snowing. I need to shovel, but I still feel that urge to saponify! Maybe peppermint, this time.
Posted by Lori Watts at 8:06 AM No comments:

Ice Shacks on the Pleasant River 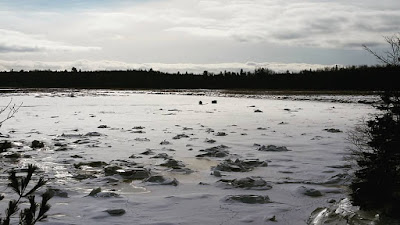 See more about Maine rivers, fishing, and habitat preservation at the Downeast Salmon Federations' Facebook page.
Posted by Lori Watts at 7:01 AM No comments: 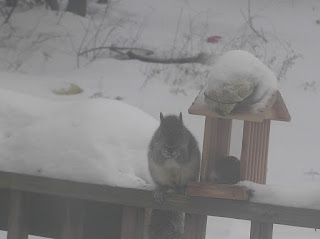 Even fluffy-tailed rats have to eat! We dedicated one feeder to squirrels, not entirely deliberately, but it turned out to be too close to the house for most birds, though a few brave little chickadees use it. The squirrels now mostly prefer this feeder - no cold metal pole to shimmy up! - so the birds have rodent-free access to the other feeders.

This feeder, filled with sunflower seed, is close to the kitchen window, so provides hours of entertainment for the cats. Win-win!

*If you look close, you can just see the tip of the Banana Boat, our canoe, sticking out of a snow drift. Dreaming of a summer day - not long now! - when we again put it to use.

Posted by Lori Watts at 6:19 AM No comments:

During the Storm, After the Storm

During our most recent Snowpocalypse, I felt the sudden urge to make soap! Today was the big reveal: 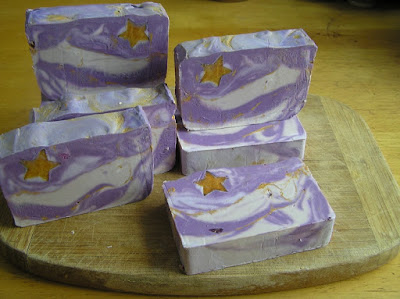 I was a little worried due to a mishap that occurred in the making - I had gotten it all poured, with all the swirls and flourishes just how I wanted them, and then realized I'd forgotten to add the fragrance. There followed some frantic pouring and mixing (and spilling) and re-pouring, so I wasn't sure what to expect from the finished batch, but all in all I'm quite pleased.

The scent is After the Storm, and I'm hard-pressed to describe it...it's very fresh and clean. If I say, it smells like a patch of violets in the air after a thunderstorm, I sound ridiculously corny but that's as close as I can get.

Snow again here today (six inches, or what we call a "dusting" here in Maine) and then Snowmaggedon Sunday and Monday. Every time we have a major storm, it lands on a class day! This winter is getting expensive. I try to make up for it by getting into the studio and making pots every snow day but while that does represent income, payment is deferred until I finish and sell those pots.

Anyway! This soap, After the Storm, needs time to cure. It will be available March 9th (right around the time the first crocus greens will be up!) and you can be sure I'm gonna share the link to purchase here.

Email ThisBlogThis!Share to TwitterShare to FacebookShare to Pinterest
Labels: Soap 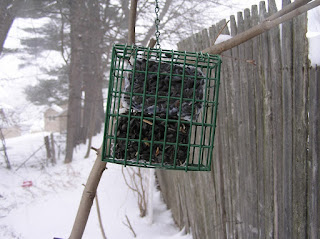 Suet cakes are not expensive items, but it's even cheaper to make your own, from lard and sunflower or millet seed.
I never thought one way or the other about lard, until I started making soap. It makes a lovely soap with a rich lather. It also means I now have lard around the house. I have a block that had gotten a bit old - not rancid, but old fats will make a soap whose scent doesn't last as long. Waste is a dirty word at my house, so I found another use for it: sunflower seed cakes.

Lard melts at a low temperature - around 85°, which makes it a bad choice to feed the birds in the summer. (It ain't likely to get to 85° today, though; it's snowing like a mad bastard.) I melt the lard in a pan on the stove, and pour it over sunflower seed in a mini loaf pan. I don't know if the plastic wrap is necessary - probably not, I mean, what could be slipperier than lard? But I didn't want to have to screw around with the mess if I was wrong. 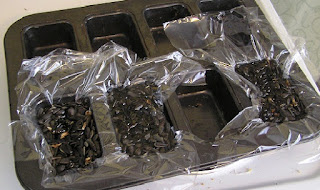 I popped the pan in the fridge, and then waited and...

Two fit in the suet cage. Surprisingly, the one with the least lard - just enough to come to th ebottom edge of the top layer of seed - held together the best.

Hoping I see my downy woodpeckers, but even if not, lots of birds enjoy a little fat in their diet, to help keep them warm during the Maine winter.

They Always Come When it Snows 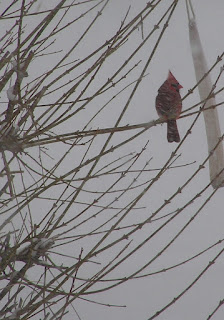 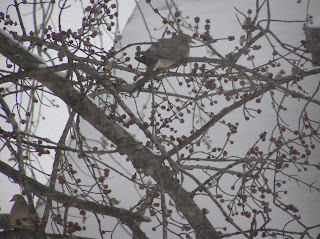 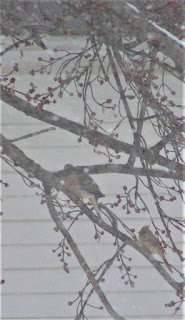 Cardinals and mourning doves. They come for the sunflower seeds; then I have finches on the thistle feeder, but they are more timid, so I couldn't even get this good a shot.

I have a suet feeder as well, but the squirrels - clever little bastards that they are - figured out how to open it, so that never lasts long.
Posted by Lori Watts at 9:02 AM No comments:

...when you wake up and there's a moose standing on your car.
Posted by Lori Watts at 6:59 AM No comments: 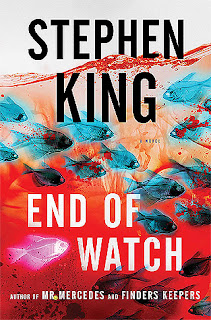 I spent close to two decades living Away, and I can tell you: let a group of Iowans know that you are from Maine, and someone is bound to mention Stephen King.

I made up a lot of lies about Maine - I used to tell people, for instance, that you had to register your chickens like dogs, and that everyone has a snowmobile, because there's only one road. I never had to make up a story about Stephen King, though: the truth was more than enough.

I'm not a big fan of horror as a genre. Dean Koontz leaves me cold. I love King, though, for his characters.

[Herein follows a rant about writers and characters. Tl;dr: most writers create cardboard cutouts of characters. If you're a writer, don't do that.] 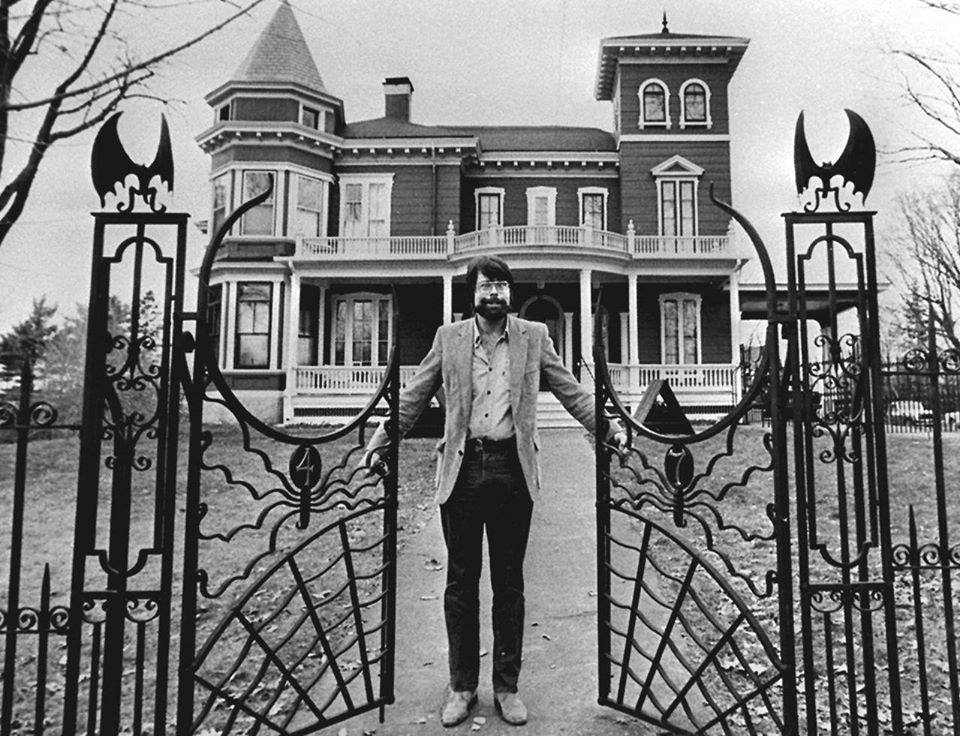 Begin rant: I'll read anything; the back of a cereal box if nothing else is available. In seeming paradox, I am also a very fussy reader - I read many many books, complaining all the while (often on twitter!) about giant holes in the plot, improbable plot twists, and most of all bad characters. Before I got most of my books on Kindle, I was occasionally known to throw a paperback across the room in response to an unusually bad bit of dialogue.

I read a lot of crime fiction, and in that genre, female characters are often written particularly poorly. Sometimes the only female characters in the book are the past, current, or potential sexual interests of the male hero. Look around the world, crime writers! Do you see any women you haven't and don't plan on fucking? Lots of them, right? Take a clue. (HAHA get it? A clue?? ) Stereotypes abound in crime fiction, as a result of the use of female characters as a plot device, rather than actual developed characters. The tough cookie, the ingenue, the socialite, the bitch.

It's a bee up my nose, for sure, but it's also the proverbial canary in the coal mine: if your female characters are wooden, your male characters probably aren't great either.

Emphasis on physical description is a symptom. Honestly I think all writers should remove the word "beautiful" from their vocabularies, except (maybe) for use in dialogue. It's lazy. If your character (male or female) is meant to be attractive, you can lightly sketch an appearance, and let us deduce attractiveness from other characters' interactions - if it even matters. Often we don't need to know what someone looks like at all. The waitress can show her dimples to your hero, and we get that she is flirting, regardless of whether or not she is pretty. Tangential to this point, if you have to tell me one character has feelings for another, you're doing it wrong. That is maybe the easiest thing in the world to demonstrate. The old adage is none the less true for its hoariness: show, don't tell.

Which brings me back to King. His latest trilogy is a set of crime dramas (with a bit of the supernatural...he is still King, after all) which feature retired detective Bill Hodges. Hodges has sidekicks, supporting characters, and adversaries...none of whom he is hoping to fuck! Imagine it. One of three main characters is a woman, and nowhere do we discover whether the average guy would want to fuck her! She has her personal strengths, weaknesses, and quirks, but she stands on her own, a fully formed character, not merely a device to create situations for Hodges.

The same is true of all of his characters: they have flaws, they have struggles, and as a result they feel real. I care what happens to them. When they triumph - not just over the bad guy but over their own weaknesses - I exult with them. It's why I always loved King's work even when he only (or mostly) wrote horror. Write good characters, and I am yours for life.

Anyway: if you haven't read these books, you want to. If you've passed over anything with the Stephen King name on it because horror is not your bag, give Bill Hodges a whirl.
Posted by Lori Watts at 5:14 AM No comments: 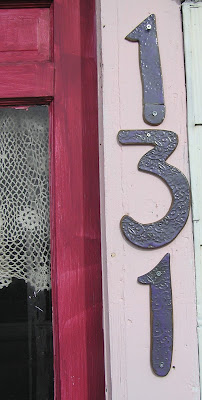 I've been meaning to replace my house numbers for like 11 years now. It's been on the list. It's a pretty long list, and included This Old Staircase, but I am knocking a few items off it, one at a time.

My old address numbers were just the ugly plastic ones you get from the hardware store. They were so old and faded the numbers were hard to read from any distance, so needed to be replaced, but since I had it in my head to make the new numbers out of stoneware, I kept putting off replacing them.

This project, like so many others, refused to do itself.

Making the stoneware numbers was not at all difficult. I am a potter in real life, all the materials - not to mention the kiln - were readily available to me. As you can see in the photo, I broke one of the numbers in transport; I went ahead and used it anyway. I had already waited 11 years for these numbers, I didn't want to wait one more firing cycle.


I am thinking of taking orders for these! $10 per number, choice of purple, yellow, blue or black...whaddaya think?
Posted by Lori Watts at 8:14 AM No comments: