In the Colonial era, when the Province of Maine was a part of Massachusetts, the making of soap was a household chore and thus a commonly known skill. Soap was made by boiling animal fats with lye obtained from wood ash to produce the saponification reaction. Women, mostly, were the producers if soap for their families; there were also tradesmen called chandlers (because they also made candles) or soapboilers from whom one could purchase pre-made bars.

These days, of course, soap is readily available and affordable, but handmade soap is, for some a creative hobby or business, and for others a delightful luxury. We can luckily skip the smelly and unpleasant boiling of wood ash step, and just purchase lye at the hardware store, or online. What happens next looks different but is essentially the same process that the colonial inhabitants of Maine utilized.

Winter is soaping time for me, since gardening is out!


I make soap in a slow cooker, purchased at Goodwill for the purpose. I needed a number of smaller tools as well: a metal spoon and a wooden one; an immersion mixer, to blend the lye mixture without splashing it; and a big measuring cup - glass, not plastic.

Here's my recipe for Cold Process Soap. If you want to try it, you'll also need rubber gloves, protective goggles, and a soap mold lined with freezer paper.

Weigh out the fats & oils and place them in the slow cooker on Low. When they have fully melted, turn slow cooker to Warm. 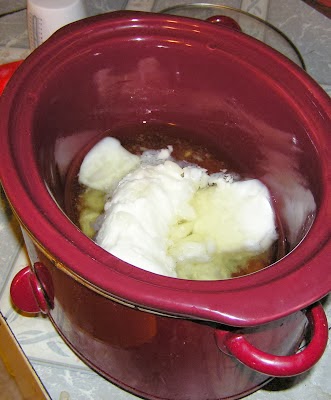 Weigh out the water and put it in a glass container. Put on your gloves and goggles and weigh out the lye. I go outside for the next bit, to release the fumes there. Always add the lye to the water, not the other way around. Slowly and carefully pour the lye into the water. The mixture will turn cloudy and get hot. Still with a metal spoon until it clears - should be just a couple minutes.

Still wearing your gloves and goggles, slowly pour the lye solution into the melted fats in the slow cooker. Stir briefly with a spoon and then begin using the immersion blender. Blend for a few minutes, and then stop, to keep from burning out the tool. Keep this up until the mixture reaches trace.

Wait, what's that mean? you may be thinking. Trace is a state of the lye/fat mixture in which the material thickens to the point that your stir marks will remain on the surface for a few seconds. If you dribble a bit of the mixture onto its surface, it will take a few seconds to sink back to level. Once the mixture reaches trace, you can be confident that your fats and lye mixture will not separate.

At trace, I add the fragrance and colorants.This batch is called Stormy Night, for which I used a purple soap colorant, in two different concentrations, for a lighter and a darker shade. I poured the two together, but just barely mixed the batch, because I wanted the two colors swirled together. This batch I layered with some gold mica - sorry, not enough hands to take a photo of the layering process! 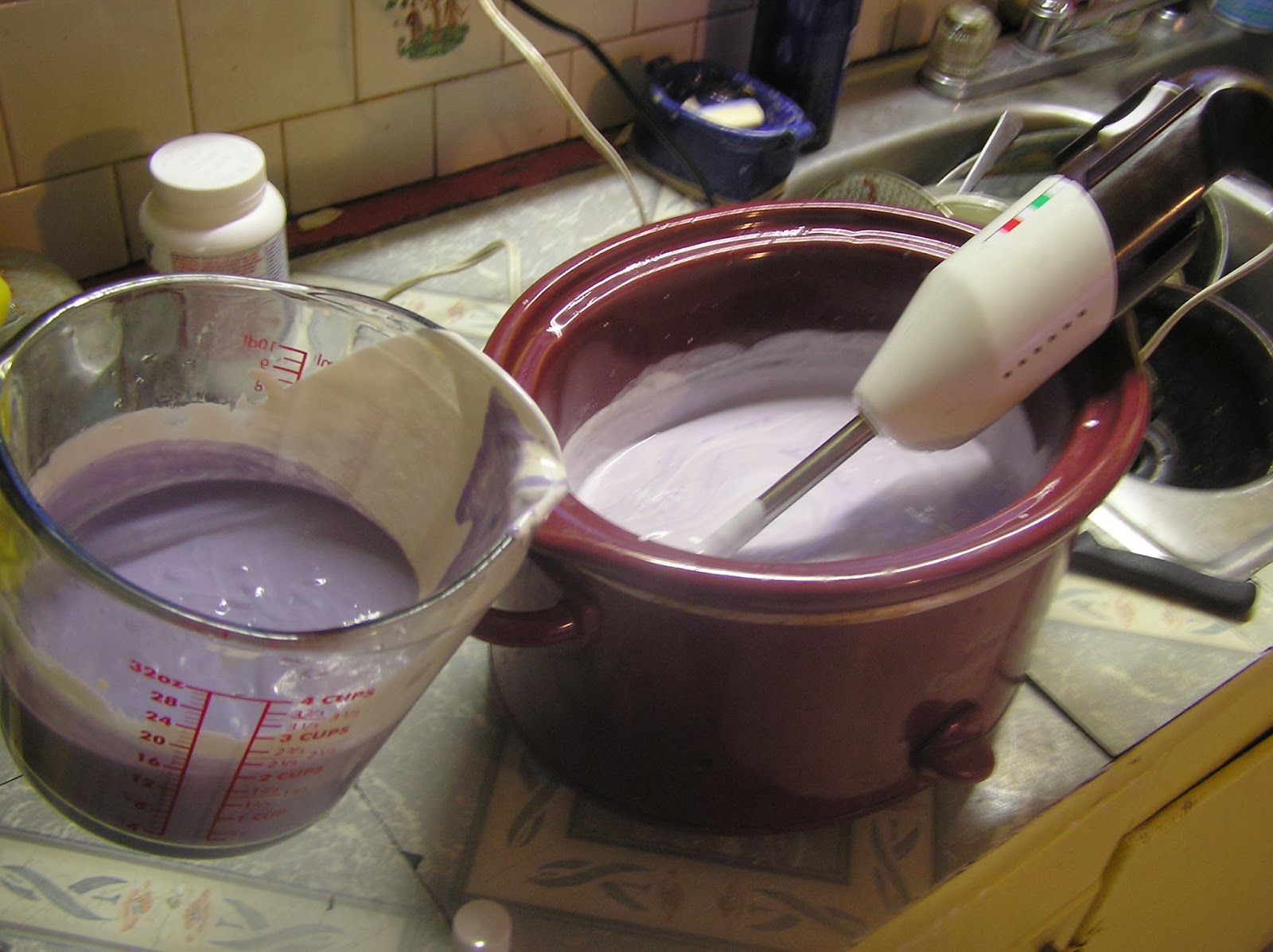 A dusting of mica on top, and then the mold is covered and wrapped in towels to hold the heat in, aiding the saponification process.
The following morning, the soap can be unmolded and sliced, but it will still be a few weeks - at least four - before it is usable. The longer it cures, the harder and longer lasting your soap will be. 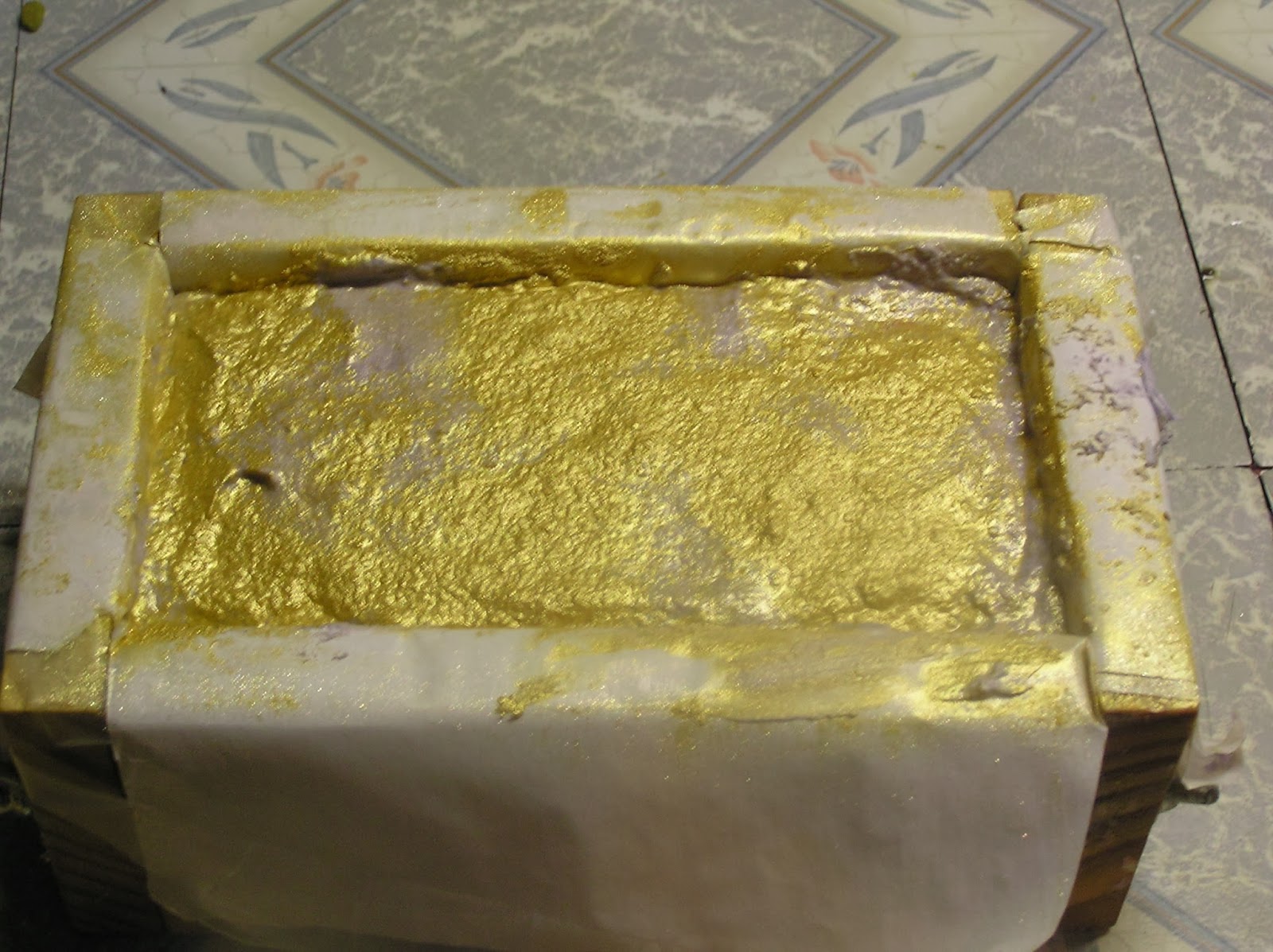 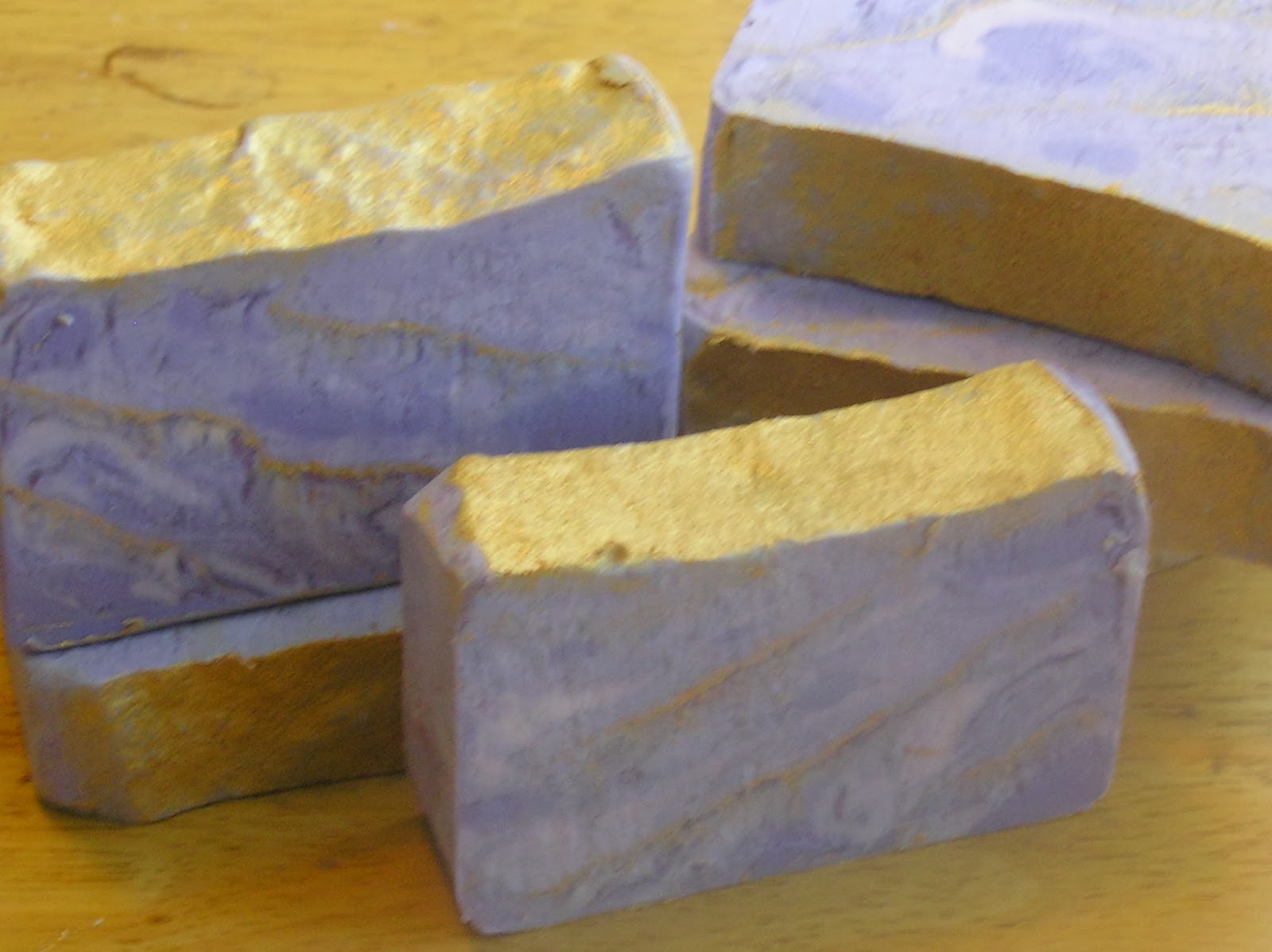 Posted by Lori Watts at 7:50 AM No comments: 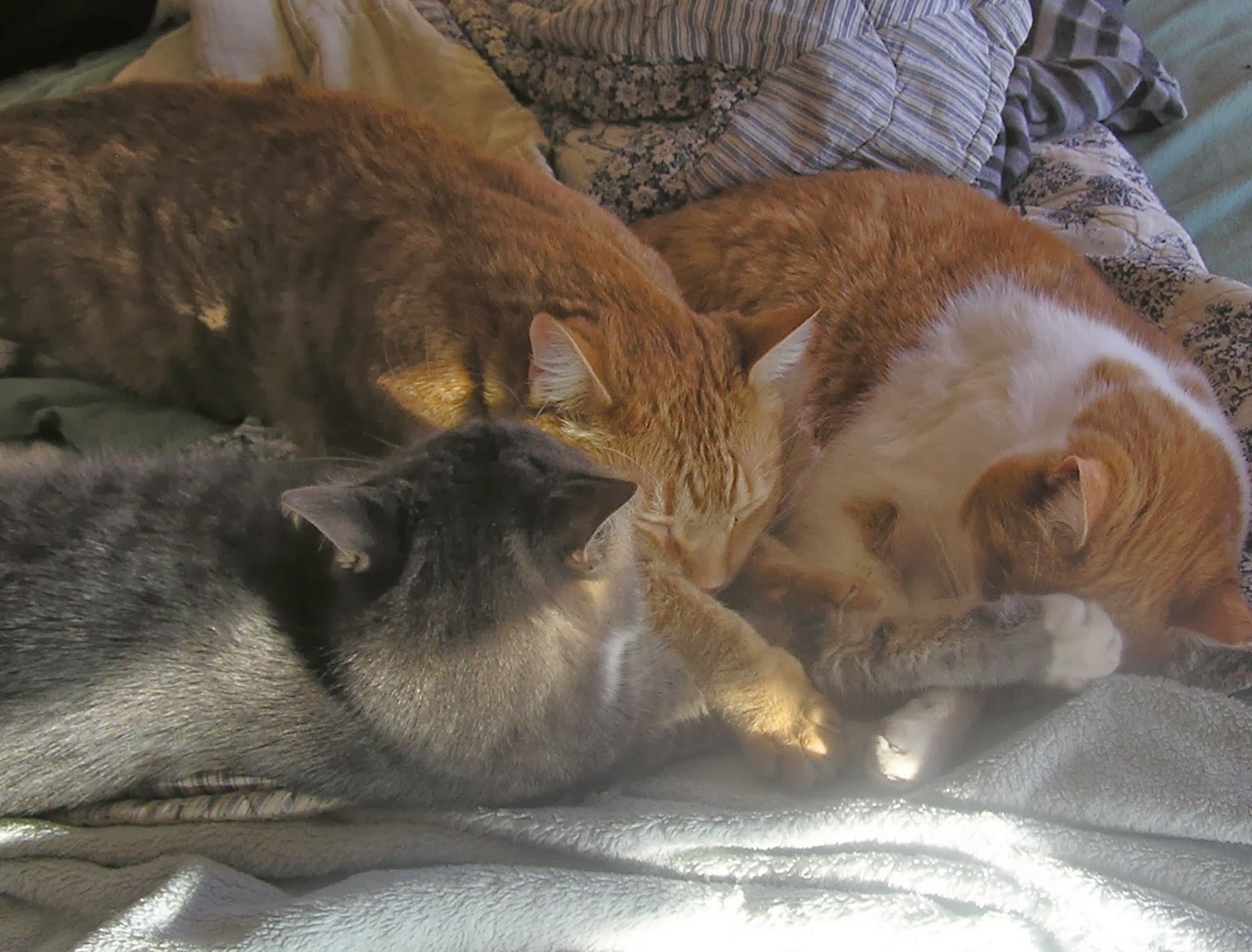 of the cat population of this house - seem to agree.
Posted by Lori Watts at 1:12 PM No comments: 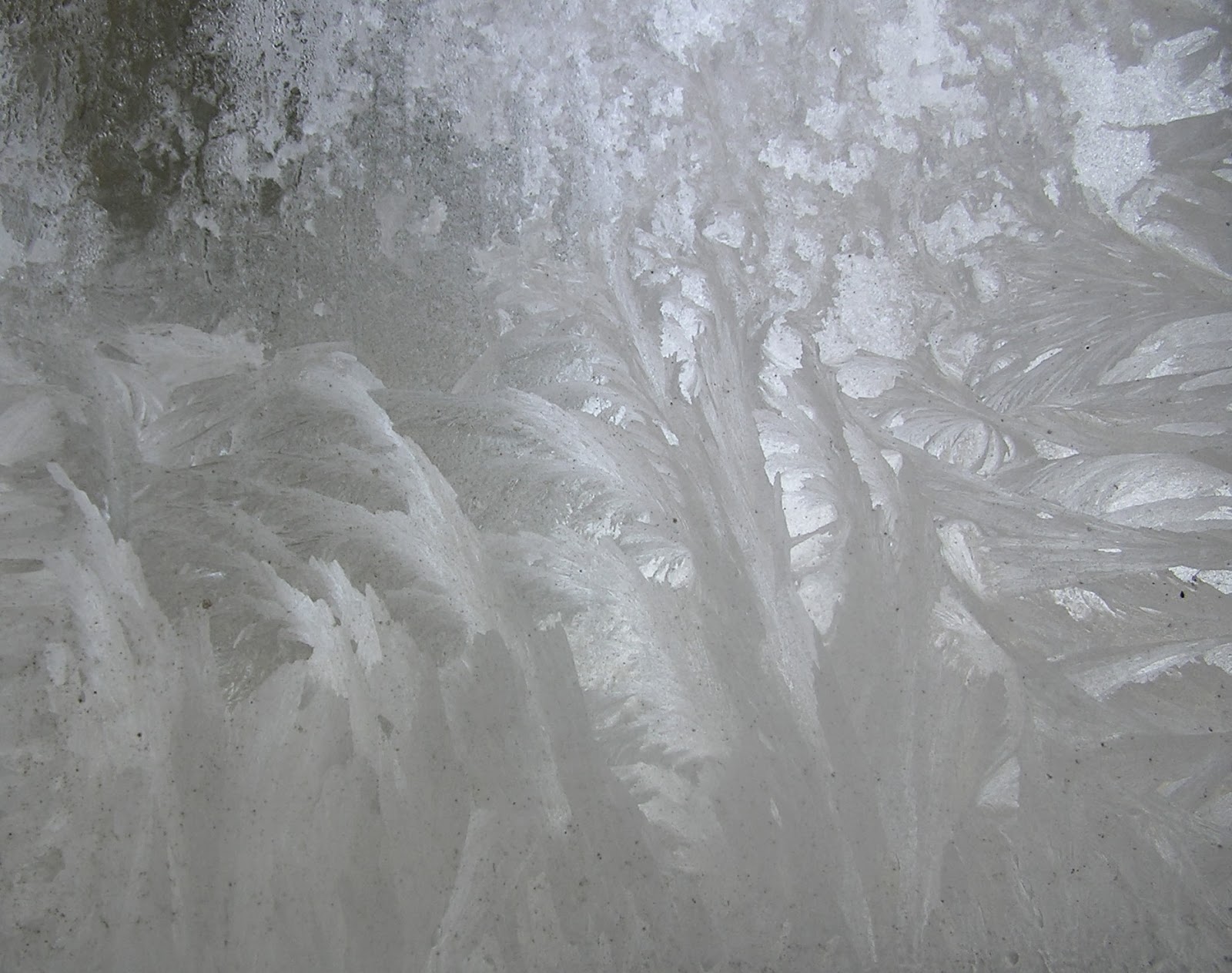 Maine is in the deep freeze again this week, but it's not all bad; the frost etched beautiful patterns on my studio windows this morning.

Email ThisBlogThis!Share to TwitterShare to FacebookShare to Pinterest
Labels: Winter 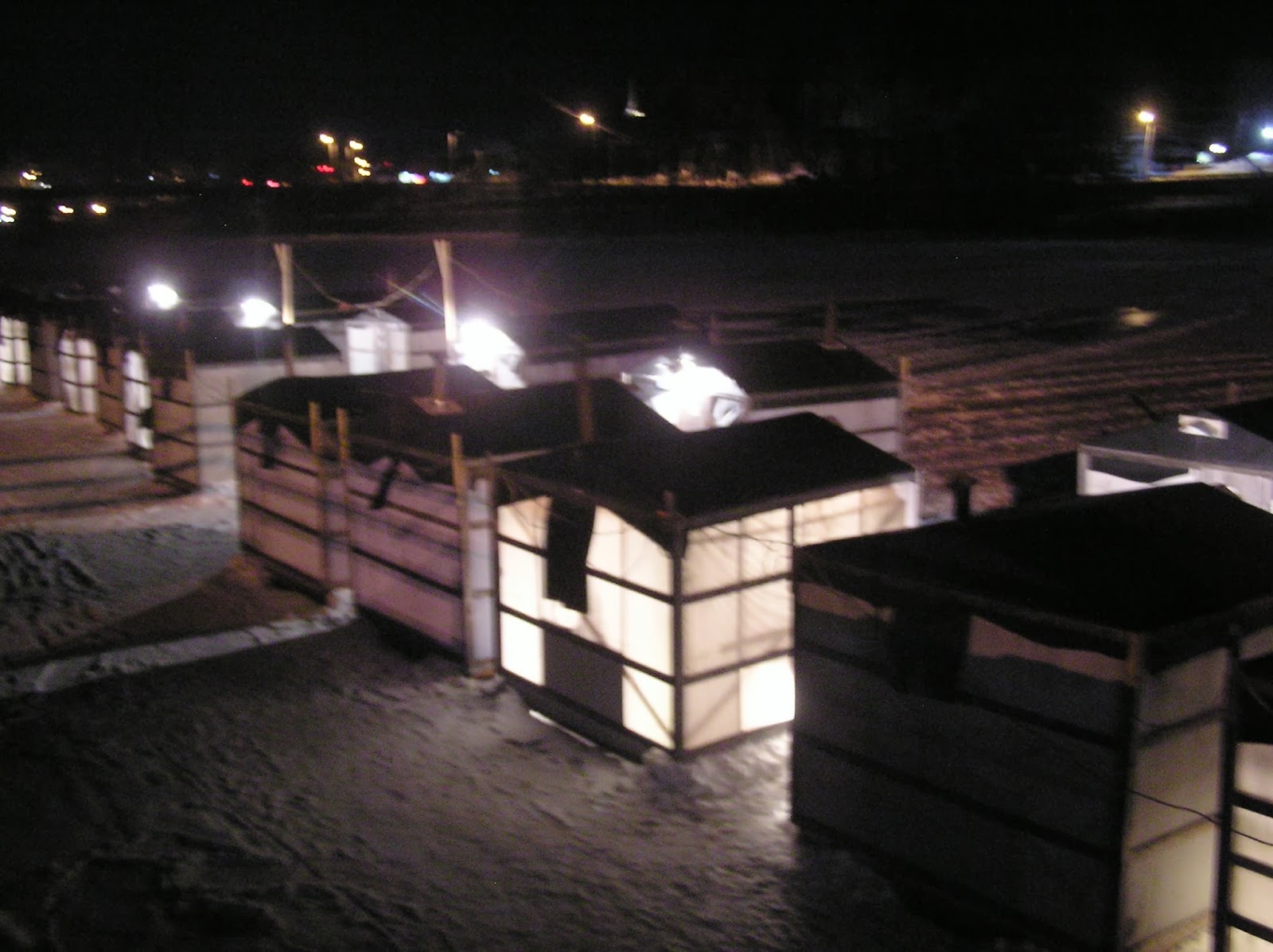 When it comes to winter activities, you really can't beat smelt camp for true Maine flavor. Every winter, little villages hastily constructed shacks spring up in the eddies of the Kennebec River where the ice is thickest. Some glow etherially at night, constructed only of two-by-fours and plastic sheeting.

This little smelt-shack village is Worthing's, in Randolph, in a little elbow of the river just before in reaches the Pearl Harbor Remembrance Bridge. Shacks come in sizes from 2-man to 8-man, and each contains benches, a row of lines on either side, and a wood stove.

My nephew is an avid smelter and has been renting a shack a couple of times a week since Worthing's put them on the ice. We also make a smelt camp outing an annual family event. We may be the only catch-and-release smelt fishers on the river! As a rule we give the fish a smooch and toss them back.

Smelt are delicious, though, if someone in you party wants to prepare the fish.

The tides dictate the rental times, with a rental lasting 6 hours, from high to low or vice versa. Some folks say fishing is better during the night tides; I couldn't say from personal experience. Smelt Camp is a rowdier place after the sun goes down, however, and arguable less family-friendly, if you'd rather not expose the little ones to salty language.

Other Kennebec smelt camps include:

Posted by Lori Watts at 5:45 AM No comments:

Welcome to Wicked Cozy, a blog about life in Maine. 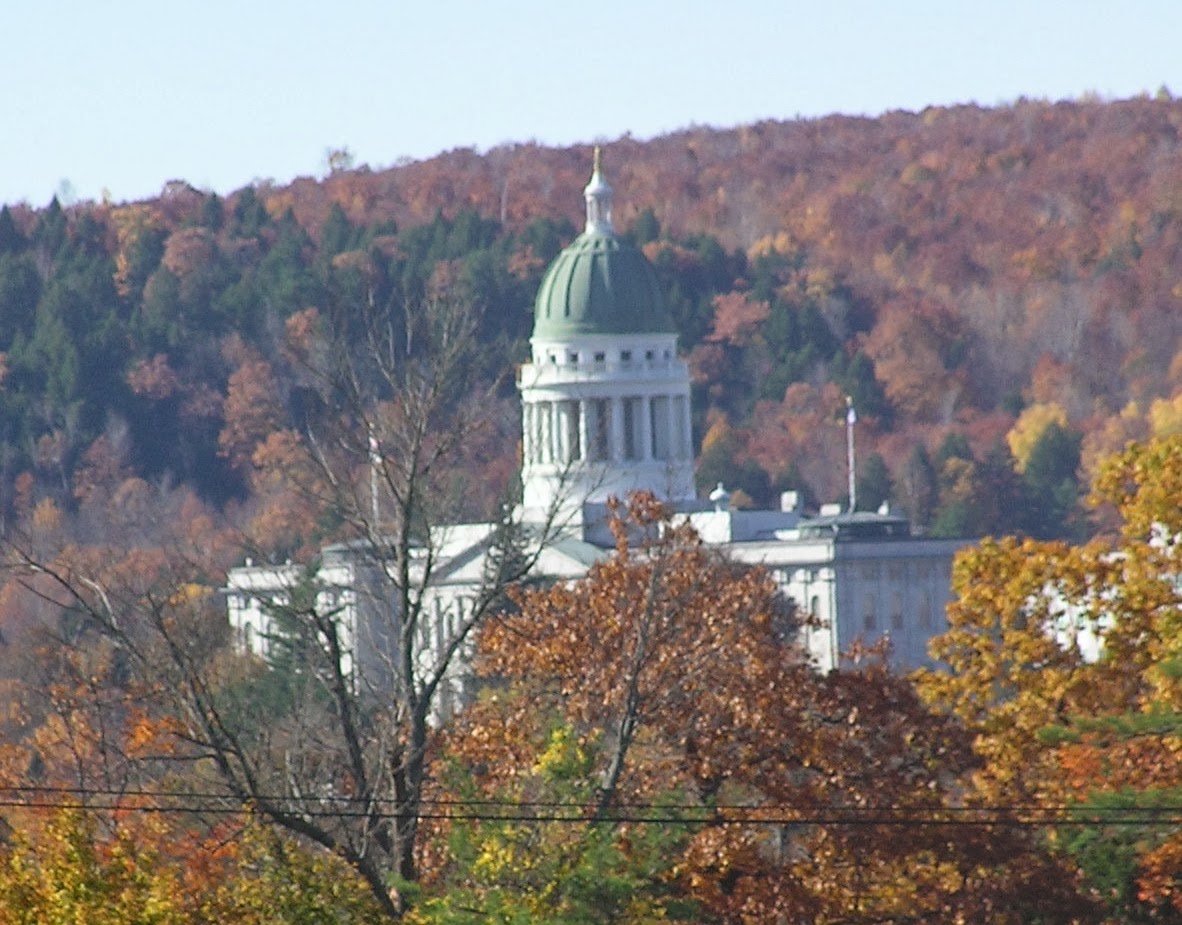 Maine living is, of course, as diverse as Maine people. Life here can be hectic or peaceful, cosmopolitan or backwoods. I want to take the Maine lifestyle at its best - creative, serene, comfortable, active - and highlight it here. I'll talk about cooking and gardening, hobbies, decor, and outdoor activities. I'll also cover shopping, dining (fine and otherwise!), and the Maine arts scene.

And just who am I? I'm Lori Watts, a potter from Augusta, the capital of Maine on the beautiful Kennebec River. I was born in Bangor and grew up mostly in Southern Maine, with frequent visits to Cherryfield, my mother's Downeast hometown. I lived away long enough to appreciate what Maine has to offer, and came back to make my home here in Central Maine. Beautiful, affordable, and full of character and characters; I can't think why anyone would live anywhere else.
Posted by Lori Watts at 10:43 AM No comments: