I saw this little lady (yes, a lady for sure!) on Macworth Island about a week ago. Because I am blessed with the kind of friends who not just notice things like butterflies, but stop and photograph them, I am starting to wonder if monarchs are making a comeback? I have seen a few more this year than last IRL, but I have seen many more on social media. In addition, my brother, who lives near a wooded area and has a large patch of milkweed on his property, says he and his wife & their little sons have seen chrysalises everywhere.

We so rarely get anything like good environmental news. The globe continues to warm, idiots continue to pretend it isn't, pesticides and habitat loss and even devices like hydro dams, which are meant to do less harm by replacing coal burning electrical generation, all contribute to species loss. Maybe, just maybe we are not going to lose this beloved beauty.

I know this butterfly is a female, because the males have oval shaped black dot on their inner wings. Here's one a friend posted:


Yes, that's a marijuana plant it has landed on. Legal in Maine!
Posted by Lori Watts at 3:55 PM 1 comment:

Email ThisBlogThis!Share to TwitterShare to FacebookShare to Pinterest
Labels: Critters, Islands, Summer, Things I Found While Walking Around, Wildlife 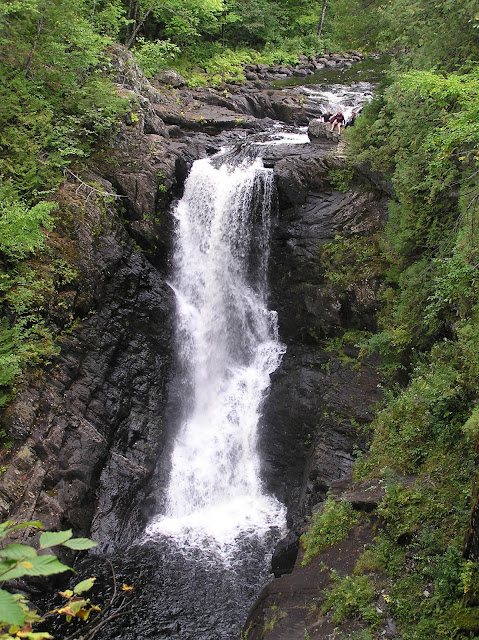 The trouble with photographing waterfalls is that you can't really get a sense of the scale of the thing. Rocks can be any size. Trees and branches have a pretty broad range, too. In this photo, the tiny little people to the top right of the falls are key to get an idea of the immensity of the drop.
Moxie Falls, in the township of Moxie Gore, plummets an incredible 90+ feet. That's three times the height of my house. The pool at the bottom of the falls is nearly 17 feet deep but I wouldn't recommend a dive.

If you aren't from Maine, you probably think of the word moxie as a anachronistic synonym for spunk or courage. This comes from the soft drink made in Maine, which in turn took its name from a patent medicine which claimed to build up one's nerve. This was before the FDA was created, when companies could make all the unfounded medical claims they wanted! But hey, how about that Big Government tyranny, amirite?

In Maine, the name Moxie is associated with a stretch of water feeding into the Kennebec River - Moxie Pond, Moxie Stream, Moxie Falls. It seems to derive from an Abenaki word meaning "dark water." The soft drink takes its name from the region, and adjective comes from the soft drink.

The trail leading into the falls is a relatively easy hike. It's wide and flat most of the way, but does include some steep staircases as you approach the falls. There are wooden viewing decks from which the view is maintained by Maine Bureau of Parks and Lands - they trim back branches and brush to keep it clear. By which I mean, don't crawl out on the ledge trying to get a better view!

A Maine man, Garth Coon, was killed 2005 when his companion, who had been swimming in a pool

near the top of the falls got swept away by the current. He tried to save her, but they were both pulled over. Though badly injured, she lived; sadly, he did not.

There is a much, much safer swimming hole upstream, within the series of small drops known as Junior Falls. The day we were there a youth group was enjoying it, splashing around, sitting on the natural bench the ledge makes just under the falls. 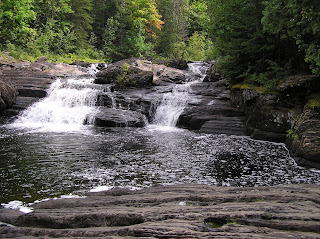 This pool is also pretty deep - people were doing cannonballs from a low ledge on the far side. It's a fast-running stream pretty deep in the woods - the water is clean and clear. The hike, while not arduous, is sort of a self-selecting mechanism; most people who are willing to walk that far into the woods to take a swim are also the sort who wouldn't leave beer cans and other trash around.

It's a pretty drive to Moxie Gore, and the area gets a goodly lot of visitors to hunt, fish, canoe, and tube. (Bullfrog Adventures will take you on a gorgeous, safe, and surprisingly cheap tubing trip.) As a result there are several little restaurants and brew pubs on 201 for you to grab a bite & a pint on the way home.