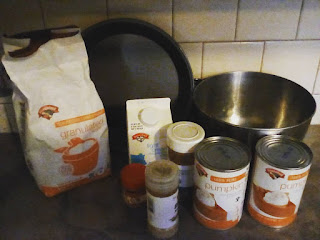 2020: a year like none other. If this were a normal year I would be preparing to host my family right now: cleaning, moving furniture around, chopping vegetables. It's not a normal year, and we decided to atomize our Thanksgiving this year: each household celebrating separately. Normally I make the hearty foods, my sister & brother-in-law bring the salad, and my sister-in-law makes pies.

Well, I'm skipping salad; I love it but Doug has no interest, and it's really only good the first day, so there would be a ton of waste. It's not like I could freeze it! We're having a turkey (it's 12.5 lbs, and it actually a bit comical to look at; it's like a miniature), stuffing, potatoes, brussels sprouts...and pumpkin pie.

I've never made a pie of any kind before. People keep telling me it's easy, but then there are all these confusing things like, you have to bake it 3 different ways? But it just didn't seem like Thanksgiving without it, so I decided to give pie a chance.

I decided store-bought crust would have to do, because pastry is notoriously tricky to get right. I bought a box of pre-rolled rounds. That actually turned out to be the troublesome part - I didn't know it would shrink! So after I had partially baked the crust I noticed it was now too small for the pan & tried to slap on some patches. Good thing this pie will not be entering any beauty contests!

Here'd the filling recipe, from my sister-in-law, the reigning queen of pies in our family:


Preheat oven to 425F. Prepare pastry. Beat eggs slightly, then beat in  remaining ingredients. Pour into crust. Bake 15 minutes. *Then, reduce heat to 350F and bake 45 minutes more or until a toothpick inserted into the filling comes out clean. Serve each slice with a dollop of whipped cream on top if desired.

*It's a good idea after the first 15 minutes of baking to cover the
pie crust with strips of aluminum foil to prevent burning.

So, it's out! Boy is this an ugly pie. Smells good, though! I'll report back tomorrow on the important bit: how it tastes. 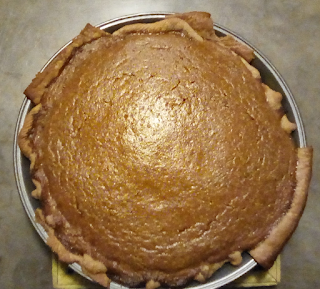 Posted by Lori Watts at 3:42 PM No comments: