Email ThisBlogThis!Share to TwitterShare to FacebookShare to Pinterest
Labels: Critters 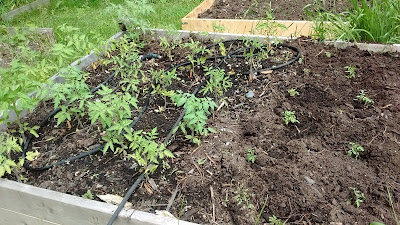 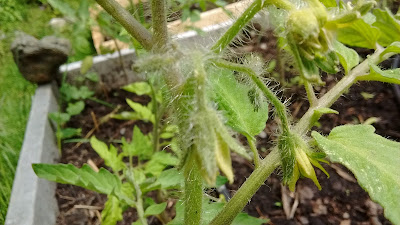 It's sort of a running joke in my family - my Dad and his tomato plants. There are reels and reels of home movie footage of beautiful green growing fruit. He was so proud of his garden.

So, not for nothin', I grew up to be a gardener, and I sort of specialize in tomatoes. And this year I have blossoms already on some of my plants! In the middle of June.

Dad would be proud.
Posted by Lori Watts at 12:32 PM No comments: 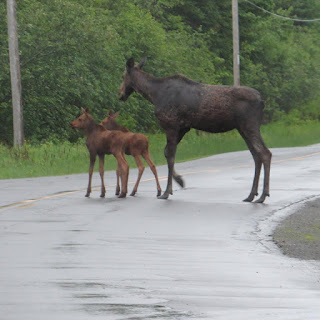 Taken near Moosehead Lake. Totally sweet, and also DRIVE CAREFULLY in the wooded parts of Maine.
Posted by Lori Watts at 2:45 PM No comments: 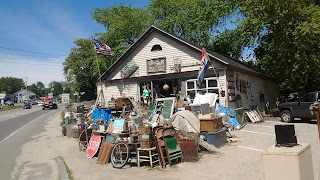 I visited a Woolwich (pr. Wool-Itch) landmark yesterday: Ed's Stuff. If you spend much time in Maine - above Cumberland count, that is - and you're like me, you've probably driven by it a hundred times, each time thinking, One of these days I'm going to stop there. 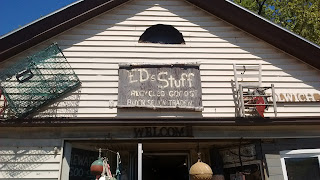 Well, the day finally came! I was driving between two craft galleries - both, somewhat confusingly, called Stable (The Stable Gallery in Damariscotta, where you can find my work, and Stable on Front, where, sadly you no longer can. Both are cute little shops, though, and you should visit.)

Ed's Stuff bills itself as an antique shop, but that would be in the Sanford and Son mold: "We buy junk and sell antiques." But if you are willing to sift through the trash, there are surely some gems.

If you want a buoy, Ed's is your place. Buoy oh buoy.


Ditto, toilets. Some in a functional state, other, not so much.

It was a fun visit! I was looking for stools, though, to go under my kitchen island (the one I haven't finished yet - but I've made a lot of progress!) But I know where to go if I need a doorknob or a buoy.
Posted by Lori Watts at 6:35 AM No comments:

Email ThisBlogThis!Share to TwitterShare to FacebookShare to Pinterest
Labels: Coastal Maine, Shopping, Things I Found While Walking Around 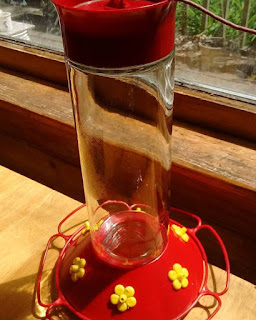 This free thing was sitting on a concrete block next to the giant recycling bin where the City of Augusta asks us to drop our plastic and paper trash. Clearly someone was downsizing but didn't want to actually discard a perfectly good item. Thanks, someone!

We feed the birds. Mostly sunflowers - tons of birds love sunflower seed - but also thistle (finches!) and suet (woodpeckers.) I've had a hummingbird feeder before but no hummingbird has ever touched it with a ten foot pole, or a pole of any length. or touched it at all. We maxed out on hummingbirds with two, this one time, but we usually do get one, and she prefers monarda and trumpet flowers. (And also scarlet runner beans, but we don't have any of those this year.) Before this things bloom. Nada. No hummingbirds.

But that's all changing now. My old feeder was pink (and so ugly it hurt to look at it, I'd take a photo but it might be considered vandalizing the internet.) I'm told they really only like a red feeder. But no red dye in the food, please, it isn't good for them, I'm told.

I'm waiting for my sugar syrup to cool right now. Here's the mix:

They like cane sugar better than beet sugar - if your bag of sugar doesn't specify, it's probably beet. I just used what I had in the house, if this doesn't bring 'em I'll try cane sugar next.
Posted by Lori Watts at 8:28 AM No comments:

On This Day: Portland Rum Riot 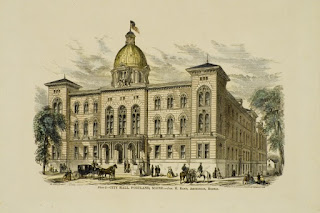 On this day in 1855, the Portland Rum Riot occurred, ending with one man dead and Mayor Neal Dow;s political career in ruins.

In 1851, Maine passed a law prohibiting the sale of alcohol, except for medicinal purposes. This is hard to picture in the Maine I know, land of 10,000 bars and home of Fat Ass in a Glass, a mixture of Allen's coffee brandy and milk.
Even at the time, the law did not go over well among Portland's large Irish population, They viewed it as an attack; Dow, a Quaker, devoted teetotaler and Abolitionist, saw the law as a social good, as much of the rum sold in the US at the time fueled the slave trade.

Dow was not just opposed to imported liquor, though: he conducted raids on groggeries and drinking establishments right in the Munjoy Hill neighborhood of Portland. When a rumor spread that the mayor was storing rum in vaults under City Hall, the Irish immigrant population were enraged by what they saw as his hypocrisy. (The Mayor had authorized the purchase for medicinal purposes, but had not appointed a committee to do the authorizing, so was technically in violation of the law.)

At that time a judge could grant a search warrant if any three citizens requested it. Such a request was made to search City Hall, and a judge granted it. With warrant in hand, the men were nevertheless denied entry.

An angry crowd formed as men got off of work. They threw bricks and rocks, and Dow called out the militia with orders to shoot. One man, John Robbins of Deer Isle, broke and unlocked the door to the store of liquor. He was immediately shot by the militia. The crowd dispersed but the militia continued to fire, and more people were injured.

Dow was later tried and acquitted on charges that he improperly obtained alcohol. He lost his re-election bid handily and never again held public office, though he ran for governor and then for president.
Posted by Lori Watts at 5:55 AM No comments: