A New Dome for the Statehouse! 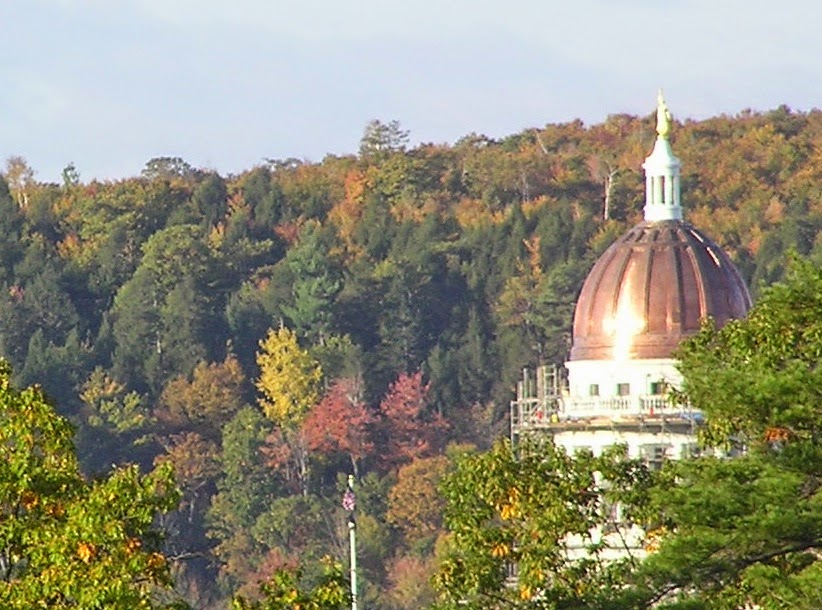 I have been following the progress from my front yard. Look how it gleams in the October sun! The Lady of Wisdom, who stands atop the dome - you can just about make her out in this photo - has been re-gilded as well. According to the Bangor Daily News:


Once complete, the statute will be be noticeably brighter from below, and the exquisite detail on the statue will be preserved, Boulter said, although at 200 feet above the ground, it’s difficult for visitors to appreciate the artwork.
Boulter said weather and strikes from hail have damaged the copper, especially on the topmost portions that are more exposed, and holes have developed, causing leaks into the building.
The seams between the copper sheets, which were first installed when the building was expanded and renovated in 1909 and 1910, also have caused problems for the underlying steel and concrete structure of the dome.
And while other parts of the building have been renovated over the past two decades, including a full restoration of the interior of the State House and portions of the exterior from 1998 to 2001, the exterior renovation of the dome is the most visible work on the building since it was expanded more than 100 years ago.
The building was expanded in the early 1900s to replicate the U.S. Capitol, in a move that was sweeping state capitols across the country.
But Maine, unlike many other states, decided not to gild its dome with gold. Boulter said historical renderings of the building show it both with a golden dome and a brownish, copper-colored dome, but none of the earliest renderings show the greenish color of oxidized copper.
Boulter said he was unsure whether the color was ever an intended effect or just the result of time.
What is certain is that the building, once the staging starts to come down later this year, will not look the same again for at least 30 years.

Read more here.
Posted by Lori Watts at 5:28 AM