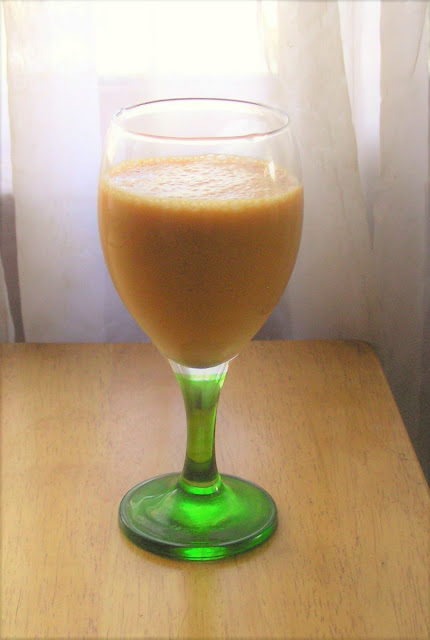 The familiar One-Pie label has not changed in half a century. It reminds me of childhood holiday baking, literally the only time cans of pumpkin puree were found in my mother's shopping cart. One-Pie has been canned in West Paris, Maine for 50+ years.

Pumpkin is having something of a resurgence, though: not just for pie, anymore! Pumpkin soups are often found on menus at trendy restaurants throughout the cold weather months, and I see pumpkin bread & muffins everywhere. Not to mention the so-trendy-it's-comical Pumpkin Spice Latte.

While I like my pumpkin pie and bread and muffins as well as anyone, I am something of a smoothie fanatic. Thick, sweet, creamy smoothies make healthy breakfasts seem like dessert. One of my requirements for my breakfast smoothie is that it not have any weird-ass ingredients like chia seed or pollen or spirulina (what even is that?) Nothing, in short, that I would have to make a special trip to Lois's for. (Nothing against Lois's - I just don't want to have to plan ahead that much.) So my version of a pumpkin smoothie is pretty simple:


So good, and good for you!